Winning the sprint may lose the marathon

It’s Budget time again in Australia and the airwaves are ringing with the politicians’ mantra that cutting tax will result in “jobs and growth”. It’s become almost a cliché and these three words are often repeated in a mocking tone by journalists and cynics everywhere. But there is a kernel of truth in the general concept that the government can stimulate both job creation and growth in the economy by cutting personal tax. As with many things in the world of economics, the success of a tax cut as an economic stimulus depends on a number of broad assumptions. We’ll take a look at economic growth in this post and you can decide for yourself if the assumptions are realistic.

Growth, or economic growth as the economists call it, is the annual change in a country’s production and expenditure. This is also called Gross Domestic Product or GDP. There are a few ways of measuring GDP; I’ll use the easiest one here which is called the expenditure method. It uses the amount spent by different sectors of the economy to calculate the total spent by the whole country. The sectors of the economy that this model considers are consumers (that’s you and me), business investment (when companies buy new machinery and when they make products for sale), the government (via government spending on roads, hospitals, rails, health) and the net difference between what we export and what we import.

Some say maths equations put readers off, but this one is necessary and you’ll thank me for it one day:

Consumer spending is by far the largest contributor, accounting for around 58% of Australia’s GDP; government spending is around 34%.

GDP grows when these numbers add up to more than they did the year before (I did mention this was the easiest method).

How a tax cut can lift GDP

When a government taxes its workers their take-home income is lowered and, in turn, the amount that can be spent by workers is less. So a tax increase lowers the C component of GDP and therefore lowers GDP overall. Turning that around it’s fair to assume that a tax cut will give a worker more money to spend and it will increase the C component and raise GDP. Instant GDP growth! But wait… it’s never as simple as the politicians would have you believe. The effect on GDP of a tax cut is heavily dependent on who receives it because, as shown in our equation above, the extra money has to be spent for it to flow through the economy, getting revved up by the multiplier effect. It’s also dependent on how it is paid for: if the government cuts taxes by a dollar but reduces its spending on other things by a dollar then there’s no change in GDP. What has to happen (and it’s actually the case in the 2018 budget) is that the government has to increase its debt — borrow more money — to raise the money foregone by the tax cut.

So in Australia in 2018 the potential GDP growth from tax cuts is actually being paid for by increasing the deficit.

The sprint and the marathon

A sprint is a nice short race, with the result known quickly.  This is an economic effect a government likes; one that you can see before the next election. What tends to cloud the outcome and to make many economic pronouncements less optimistic is long run analysis.

Let’s look first at the short run effect of a tax cut. The cuts are aimed at lower-income earners, at least in the next few years, so there’s a good chance that the tax cuts will be spent, ploughing money back into the economy. Since weak wages growth has curtailed their spending in recent years it’s likely that expenditure by this demographic will rise.  Remembering that close to 60% of GDP is consumer spending, you can see that the effect on GDP is likely to be positive. When tax cuts go to high income earners, who probably already have enough money to pay for their daily requirements, it’s likely that they’ll invest it, or pay down their mortgage rather than spend it so the effect on GDP growth is likely to be less.

In the long term, if the tax cut is financed by an increase in government borrowing then it may actually reduce GDP as the increase in interest payments and potential upward pressure on interest rates can have significant negative effects on the broad economy. In the marathon time frame the results could diverge widely from those forecast by a government looking to grab a few extra votes

What’s worth noting about the 2018 tax cuts announced in the Commonwealth budget is that, as we showed in our GDP equation, the same GDP effect of a tax cut which raises consumer spending (the C component) could have been achieved by an increase in government expenditure of the same amount (the G component). The effect would probably take longer to hit the economy because a tax cut can be spent this year but a government-funded project may take a few years to get going.

There is, however, a built-in problem with the tax cut: it will become a permanent feature of the economy (which future governments will be reluctant to change) whereas an increase in government expenditure can be turned on and off at will. With a permanent tax reduction there’s much less opportunity for a government to respond to a large external shock — the 2008 GFC being one major example. The 2018 tax cuts could be a move which may leave the economy in a worse position in the long term, no matter what short-term boost the economy might receive from them. It’s definitely going to reduce the ability to pay back the large accumulated borrowing that the government has done in the last decade.

So have we answered the original question and shown that tax cuts lift GDP? Maybe not, although the results should strike a chord with anyone who favours tax cuts for lower-income earners. 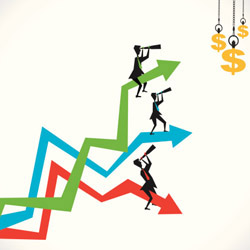 Political ideology has been too strong a voice in the debate and has muddied the waters about what drives economic growth: an appropriate mix of well-aimed tax cuts for middle-income earners and effective government spending.

In conclusion, due to the complex nature of the economy, it’s almost impossible to quantify the effect on GDP of a reduction in income tax in either the short or long term. The economic theory suggests that there will be a boost to GDP from the cut since it’s (initially) directed at those on lower incomes. In the long-run it’s hard to fully appreciate and quantify how the economy may respond.